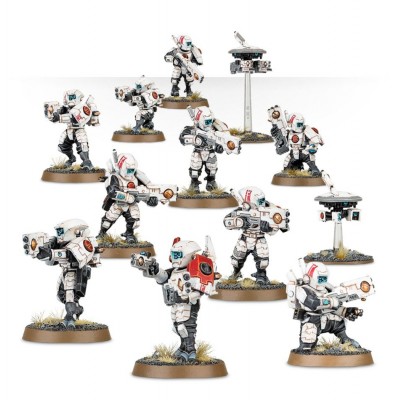 Not only is the path ahead illuminated by the light of the Greater Good, but also the glow of pulse rifles. The courageous Fire Warriors, with the absolute, zealous belief in the destiny of their race, fight with unstoppable fervour and enviable skill. Benefiting from the astonishing rate of technological advance displayed by T'au engineers, their armour is lightweight yet durable and their weaponry reliable yet powerful. The Fire Warriors Breacher Team specialises in brutally effective close-range assaults, clearing buildings of threats in a tight, tactical formation and delivering sharp, shockingly sudden frontline displays of raw incendiary power that grind enemy soldiers into dust, discharging pulse blasters and hurling photon grenades until they are certain every path is clear.

This multi-part plastic kit gives you everything you need to build ten T'au Empire Fire Warriors, in their Breacher Team configuration. One model may be upgraded to a Shas'ui, and the kit includes two drones, a DS8 tactical support turret, a selection of different shoulder pads and back packs and a choice of weapons - pulse pistols, pulse shotguns, EMP and photon grenades! 230 components in total, with ten Citadel 25mm Round bases, one Citadel 40mm Round base and two small flying bases.

This kit can also be assembled as a Fire Warriors Strike Team or Breacher Team.