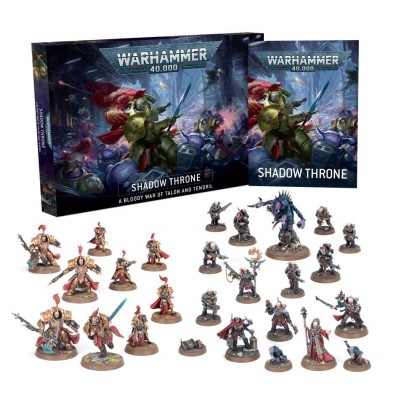 Deep beneath the surface of humanity's Throneworld, the agents of the inquisition have made a horrifying discovery – a Genestealer Cult has taken root amidst the shadows, spreading its malignant tendrils across Holy Terra. Such a threat to the Imperium's heart cannot be permitted, and so Blade Champion Aristothes Carvellan leads an elite force to purge the xenos threat. So begins a nightmare subterranean war against the beast known as the Begetor and its mutated brood.

Whether you're a long term defender of the Imperium, or a fledgling Cult acolyte, this box contains two exclusive miniatures, plus a force for both the Adeptus Custodes and Genestealer Cults, meaning you'll be able to kick off your own recreation of the Unthinkable War on Terra, or fold these reinforcements into an existing army.

- 1x Blade Champion
- 3x Allarus Custodians, with the option to build one miniature as a Shield-Captain, and one as a Vexilus Praetor
- 5x Witchseekers, able to be built as Vigitalors or Prosecutors

A 32-page Shadow Throne campaign book covering the narrative of the Unthinkable War, which sees the Adeptus Custodes and Sisters of Silence in conflict with a covert uprising of Genestealer Cults beneath the Imperial Palace itself. This book contains Datasheets for everything in the box, as well as rules for the Deadly Ambush Theatre of War, a two-mission campaign, and Crusade rules giving each faction a Battle Trait table and both an Artificer and Antiquity Relic. All together, this makes Shadow Throne a brilliant choice for new and existing players alike.