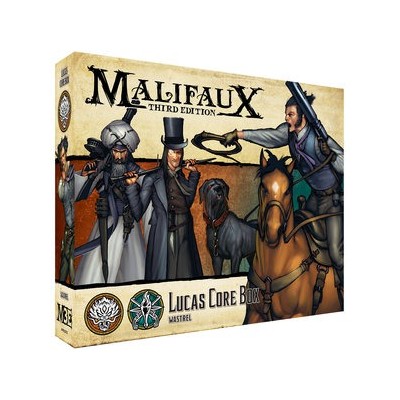 Dabbling in assassinations, blackmail, racketeering, burglary, gambling, kidnapping, smuggling, drug trafficking, and anything else deemed illegal, the Ten Thunders is a crime syndicate primarily based in Malifaux City’s Little Kingdom. Sworn to secrecy and expected to willingly give their lives for the organization, members are exceedingly devoted to their cause, which is to ultimately gain control of Malifaux in its entirety.

Following his termination by the Governor-General, Lucas McCabe has found himself in a desperate situation, working with new unknown allies. Fortunately, he’s retained his trusty horse and a cache of artifacts, which he can hand out to his subordinates to help them out in battle. As is befitting a group of treasure hunters and scoundrels, the Wastrels that follow him into battle often possess the Looted Supplies Ability, allowing them to draw a card if they start their Activation near a Scrap Marker.

Malifaux models are  32mm 'heroic' scale miniature made of high quality plastic. Will require some preparation and assembly.

This kit is made of plastic and is unpainted