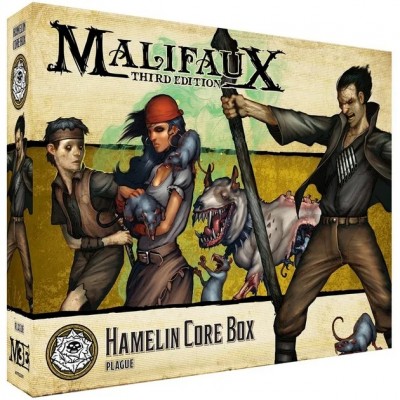 Malifaux Third Edition is a story-driven skirmish game where two players fight one of the endless skirmishes for control over the towns, settlements, and places of power in this dangerous new world. In Malifaux, the events from its extensive lore are directly carried into the characters' mechanics. With a streamlined hiring system, straight forward and updated rules that don't get in the way of the fun, and enough strategic depth to keep those mental gears turning for years to come, it's never been a better time to dive in.

Freedom's a lie sold to fools who will bury whatever sod you're sellin'. You'll have an easier time holding the sun in the palm of your hands than finding true freedom. Many of the Outcasts once bought into the well-groomed sales pitch, chasing imagined diamonds. But now that they're no longer wanted to wander the city, these renegades have become what many had already assumed them to be: outlaws on the run, pushed away by the society that chooses to misunderstand them. As long as there's a lawman, there will be those that oppose them, those that ignore them, and those that defy them. It won't be some blind bull that dictates what's right or wrong. To an Outcast, the decision to charge toward or escape from their destiny is theirs and theirs alone.

Hamelin has been refocused around his Blight mechanic, which has taken the form of Blight Tokens. The minions of Plague hand these tokens out via the Diseased Ability, which places Blight Tokens on models that activate near them. As models accumulate more Blight, Hamelin and other Plague models become more powerful, as can be demonstrated with a glance at the Bleeding Disease Action, which deals damage equal to the number of Blight Tokens possessed by the target.