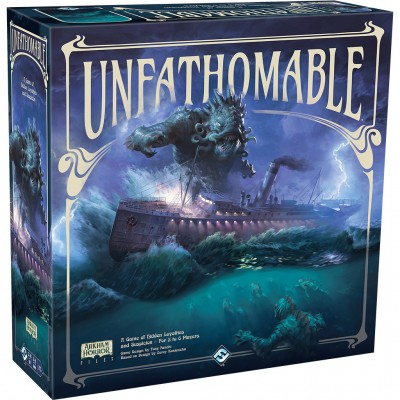 Unfathomable is a game of secret alliances and intrigue. Players play as humans fighting for the survival of the ship or as traitors working to prevent it from reaching its destination.

The cruise does not have fun

The year is 1913. You are aboard the SS Atlantica, a modest liner operated by the Fairmont Shipping Co. that is headed for Boston, Massachusetts. During the first few days of the voyage, rumors spread quickly: the lookouts had spotted shadows with huge outlines that seemed to follow the ship beneath the waves.

Some of the people on board are behaving strangely, making raucous noises or staring out to sea. You don't feel like your normal self either. Your nights are tormented by visions of watery landscapes where dark silhouettes gather. The tension is palpable, the nerves are raw; the ship is a powder keg about to explode.

Terror on the high seas

Unfathomable is a game of secret alliances, intrigue and total paranoia for 3 to 6 players. Some players are humans and fight for the survival of the ship, its passengers and crew. Others are traitors, sent aboard the SS Atlantica by mysterious beings to prevent it from reaching its destination! Because players' allegiances are secret, distinguishing your allies from your enemies is crucial to winning a game.

During the game, human players must arm themselves, fight the mysterious beings, rescue the passengers, and keep the ship from sinking. At the end of each human player's turn, a crisis arises that either results in a difficult decision for a particular player or must be overcome by the entire group. To win, the humans must cooperate and see the ship through its journey.

Traitors have crept in among the humans. In secret, they sabotage the ship and do everything to seal its fate. If the ship sinks before reaching its destination, they win.