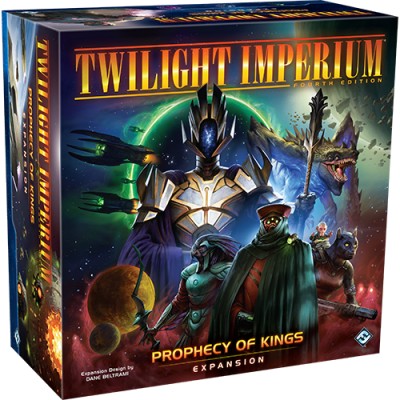 Prophecy of Kings is the official expansion of Twilight Imperium Fourth Edition.

Scholars have long debated the existence of Ixth. Once rumored to be a verdant paradise, an expedition through an enigmatic gateway has revealed the truth. Ixth was never a paradise - it was a prison.

When the Lazax Imperium was in its infancy, it waged bloody war upon the tyrants known as the Mahact. World by world, the Mahact were pushed back, until only Ixth remained.

In a desperate gambit to end the war, the Lazax isolated the Mahact and their ancestral home from the rest of the galaxy. But over the millennia, the secret of Ixth's existence - and its location - would reach the ears of those easily manipulated.

As the echoes of the past tear through the galaxy and the Prophecy of Ixth turns to ash, a new flame grows amidst the still-burning embers. The Prophecy of Kings...

The most notable change to game play with the expansion is the ability to explore planets and systems. Exploration allows players to gain further rewards for expanding and reaching new systems

7 new Factions are introduced in the Prophecy of Kings Expansion. Most of the Factions have emerged in the galaxy as a result of the catastrophic expedition to Ixth. Many of their abilities and technologies feature and highlight the new mechanics and components of this expansion.

This is not a stand-alone product. A copy of Twilight Imperium Fourth Edition is required to play.