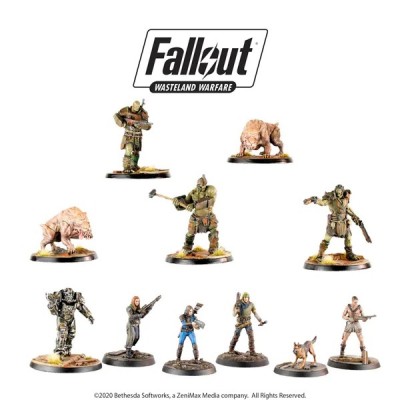 Players build their own crew from a wide range of factions, allies and iconic characters from the Fallout series. Play through a solo campaign or setup AI forces as a third party in your player vs player or co-op games.

WARGAMING IN THE WASTELAND!

In Fallout: Wasteland Warfare players build their own crew from a wide range of factions, allies and iconic characters from the Fallout series, and play in post-apocalyptic tabletop combat games of 3 - 30 high quality 32mm scale miniatures.

Pick units or characters and give them access to V.A.T.S bonuses and select a Leader who can gain Perks and other abilities to support your crew. Develop your settlements, buildings, defenses and resources to impact your crew’s army list and abilities in the wasteland.

Fallout: Wasteland Warfare includes narrative campaigns as well as standard points-based battles, random missions with narrative-style objectives, and you can even search the wasteland for gear or other loot. Bottlecaps recovered in missions can be used to improve the crew’s perks, weapons, gear, and other upgrades for the next encounter. All gameplay modes support Player vs. Player, Co-Op or Solo play.

The Fallout: Wasteland Warfare Two-Player Starter Set contains 32mm scale high-quality multi-part pre-assembled PVC miniatures with scenic bases. Miniatures are fully assembled in the factory and supplied unpainted. You can upgrade this with the Resin Two Player Starter Models set to get most of  the miniatures in multi-part high-quality resin (except Deathclaw which is available separately, and the Alien Zetan which is PVC-only).

A 3ft x 3ft two-part paper gaming mat of the area around the Red Rocket diner!