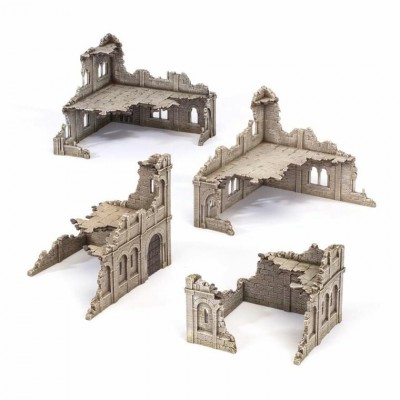 The Middle-earth Strategy Battle Game is an exciting wargame based upon J. R. R. Tolkien's The Lord of the Rings and The Hobbit. Delve back into the fiery depths of Mount Doom as this strategy game portrays the classic struggle of Good vs Evil with all of your favourite characters from Middle-Earth, allowing you to replay all the epic battles from the books and big-screen. Will the Riders of Rohan and the Army of the Dead arrive in time to aid the White city of Gondor against the Dark Lord of Mordor and his orc hordes? Will Sauron retake the one ring and claim Middle-Earth for his own? Will Gandalf defeat the mighty Balrog? Only you can decide...

In this epic box set you will be able to recreate the legendary battle between the forces of Gondor and Mordor, with a range of newly sculpted models along with some existing ones as well as two stunning scenery pieces of the Gondor Ruins you will be able to bring this battle to life on your own tabletop.

The Forces of Good

The Forces of Evil

This box contains the complete, unabridged 224-page hardback Middle-earth Strategy Battle Game Rules Manual, packed with essential rules, guides and information covering Open, Narrative and Matched Play with your Middle-earth miniatures. This edition has been updated to include the latest updates and balance adjustments, making it the most current and complete ruleset. Everything from the basic fundamentals of movement and combat through to fielding siege engines and casting magical powers is here, in a simple format with annotated diagrams and photographs demonstrating the flow of battle. You'll also find beautifully-painted armies to inspire you!

The box also contains a 16-page booklet with all the scenarios and profiles you need to recreate the Battle of Osgiliath with your models. Four Scenarios allow you to play through a linked mini campaign - The Orcs Cross the Anduin, Ambush!, The Hunter or The Hunted?, and Fall Back to Minas Tirith!