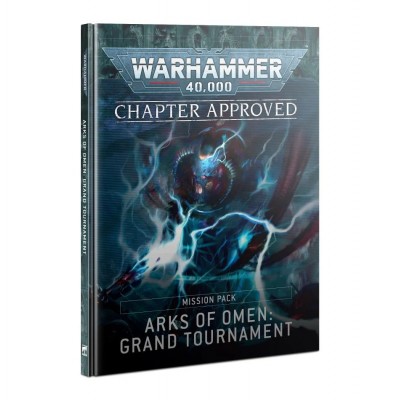 The Great Rift has torn the Emperor's realm in two. Day by day, war upon war, the galaxy careens ever closer to total annihilation. From amidst the growing anarchy rise those who would seize an ashen victory for themselves. The greatest amongst these is Abaddon the Despoiler. Forging an infernal pact with Vashtorr the Arkifane, he has unleashed the mighty Arks of Omen upon the galaxy – and with them, a new era of war.

This Grand Tournament Mission Pack is the most up-to-date addition to any Warhammer 40,000 gaming toolbox, intended for use in competitive events and matched play games. Inside its pages you'll find complete secondary objectives for every faction, a range of competitive missions designed and updated for this season of the game, and an entirely new way to muster your armies for matched play games.

Whether you're a tournament regular or simply like to ensure your battles are always fought on an even footing, this is the essential supplement for matched play games of Warhammer 40,000.

Inside this 144-page softback book, you'll find:
– Two mission packs comprising nine missions each for Incursion and Strike Force battles, designed to offer a wide array of challenges to players

– A brand new Arks of Omen Detachment to use when mustering your army, making roster-building more flexible and intuitive than ever before

– Guidelines for setting up and playing a matched play or Grand Tournament-level competitive game, including suggested battlefield size, time limit, and how best to determine secondary objectives

– A blank tournament scoring sheet for you to photocopy and use, with an annotated example of how to fill it out
​
– The basic rules needed for matched play games of Warhammer 40,000, including a glossary and explanation of rare rules, as well as an introduction to the Battle Ready standard of painting for your miniatures

With this book, you will also receive a code to unlock Chapter Approved – Arks of Omen: Grand Tournament Mission Pack content in Warhammer 40,000: The App.