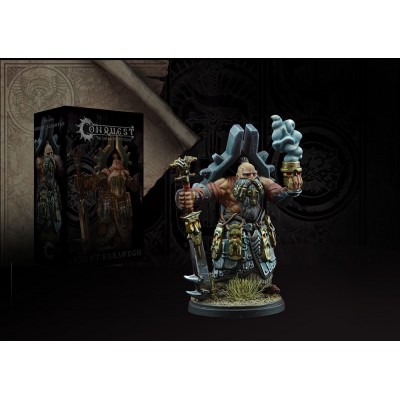 As a faction based on the exaltation of freedom, the Ardent struggle mightily with the questions of leadership and organization, particularly as the roles and influence of the Mnemancers is rather limited within their creed. The Ardent are organized around authoritative individual figures, who have been elected by their peers and subordinates to lead. These are almost universally powerful and popular warriors, whose exploits command the respect of their peers. While few hard-and-fast rules exist on the requirements and procedures of leadership amongst the Ardent, one thing is clear: to lead amongst the Ardent, one must not merely have undergone the Dheukorro, the Descent, but must fully embrace it as a way of life.

Exemplars of the Ardent creed, the Kerawegh have gone farther and deeper than any living Dweghom in the Dheukorro: they have reached the very gates of War’s Primordial prison. Refusing the dark call of that promethean threshold, the Kerawegh find in their devotion to kin and creed the strength to turn back to the surface. Acclaimed by their fellow Ardent, the respect they command among their fellows naturally pushes them into positions of leadership in their anarchic creed.

Mighty warriors in their own right, the Kerawegh are a terror on the field not for their skill at arms, but rather for their ability to channel the faith and fervor of their brethren into harsh battlefield miracles. These savage miracles they are capable of invoking are not taught as there is nothing that resembles a church or structured faith amongst the Kerawegh. They are gifts earned at the very end of their Descent, on the very threshold of Wars primordial prison.

Those few amongst the Kerawegh who care to speak of their new-found powers almost invariably describe how the clamor of war that all Dweghom hear throughout the Descent rises to a crescendo the closer one gets to War’s prison. Standing before the Gates, they are assailed with the din of a hundred concurrent battles despite being miles underground. The wisest amongst them suspect that these are the sounds of every battle and combat being fought on the surface, somehow echoing in the threshold of War’s demesne. But what all of them will agree upon is that some portion of their own soul or psyche is moved to respond to these brutal rhythms.

Upon their return, they find themselves so intricately attuned to the din and clamor of battle that they are somehow capable to project that dreadful power onto those around them. Their already impressive martial prowess is heightened by the song of war, making them an unstoppable force whether in offence or defense.  Allies who heed their call are exhilarated by cadence of battle, each blow and cry granting them a reprieve or an opening they can exploit, while a Kerawegh’s foes hear only the screeching cries of breaking arms and the screams of the fallen, a discordant sound that saps their will to fight.